The Strokers Legends - 20+ Years of Membership

The Strokers Legends represents the heritage and tradition of our brotherhood.  To qualify for this prestigious status, members must be involved with the organization for 20 years or more.  Our members consist of a wide variety of leaders of industry.  Many of our members belong to collegiate fraternities as well.  The Strokers Legend distinction symbolizes our commitment to uphold our core values of honesty, sincerity, and integrity.  The Strokers Legends﻿ gives a historical perspective for future members to not only appreciate where we came from, but to strive to continue pushing forward. 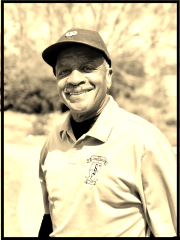 Mr. Usher served as a Tool and Die Engineer in the 82nd Airborne.  The skills he learned in the military lead him to work as an inventor in the private sector.  Mr. Usher retired from AT&T after working for many years in the research and development section of Bell Laboratories.  Since retiring he took his passion for invention and created Usher Enterprises.  Usher Enterprises developed and patented a fruit juice that can be served hot or cold.  It is the only juice of its kind sold anywhere in the Southeast region.  His products can be found at major retailers such as Wal-Mart, Kroger, Amoco Gas Stations, and Wayfield Foods.  Mr. Usher won the 2002 through 2012 DeKalb County Senior Olympics Golf Championships.  He won the 2016 Strokers National Championship. And in 2019 he donned his first Stroker Jacket becoming Mr. Stroker winning in a head to head playoff. Mr. Usher states, “ Playing with The Strokers makes playing anywhere else easier.  The focus needed during our competitions makes it easier to play outside of the group.” 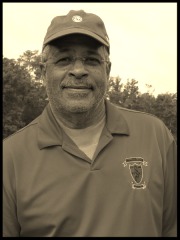 Mr. Johnston is a member of Cascade United Methodist Church, Cascade United Methodist Men, and the Cascade Men’s Usher Board.  His involvement in the community is also fostered with his membership to the Saint Augustine High School Alumni Association in Atlanta.  Saint Augustine High School is an educational institution dedicated to the education and development of young Black men located in New Orleans, LA.  Mr. Johnston’s dedication to The Strokers derives from the fellowship he enjoys and the opportunity to network with like-minded individuals.  He has his goals set to one day retire and elevate his game to a point where he can win a Low Gross title.  While he enjoys the competitive environment, he relishes the environment of Strokers’ friendships.  Mr. Johnston’s hope for the future is that all Strokers should be mindful that ultimately…”it’s about the fun of the game.” 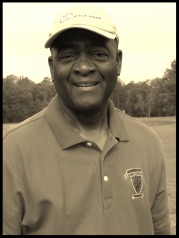 Dr. James Fisher is a board certified Internist with 36 years of experience.  He is the first African American physician to practice medicine in the city of Marietta.  Along with practicing medicine, Dr. Fisher relishes in giving back to his community through various organizations and affiliations such as Omega Psi Phi fraternity and Blacks United for Youth (BUY-Cobb).  Dr. Fisher feels The Strokers is a great platform for networking and fellowshipping. “Membership in The Strokers can help individuals understand how to be professional, and the aspects of being a good man.  “A man can come to Earth with nothing, obtain only a shirt and a pair of shoes in his lifetime.  That man owes somebody for what he has.”  Dr. Fisher’s passion for giving back is only shadowed by his unrelenting work ethic. .”  A tireless worker, Dr. Fisher loves his work and does not see slowing down any time soon.  When asked how he juggles a thriving private practice where he is totally immersed in the business operations, countless business and social engagements, family, and practicing golf, he stated matter of factly, “I never get tired.” 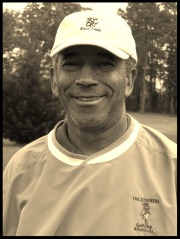 Mr. Vereen is an active member of the Omega Psi Phi fraternity where he is fully immersed in his civic duties. He strongly believes in giving back to his community and enjoys mentoring at-risk youth.  Mr. Vereen’s initial attraction to The Strokers was the camaraderie created by the fellowship from gentlemen of various professional backgrounds.  “I would like members to carry on the supportiveness that we had in the early years.  We showed up to venues in force, 50 members strong, with the right attitudes.”  As Mr. Vereen approaches full retirement he plans to get more involved with his mentoring program.  His mission to take his mentees on an airplane out of town will one day be realized.  “Many of these kids hardly get the opportunity to get outside of their communities…most of them have never been on an airplane.”  Besides mentoring at-risk youth, and catering to his lovely wife, Mr. Vereen states lightly about retirement, “I plan to play a little golf too!” 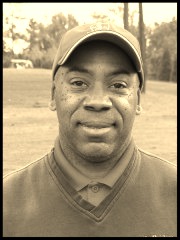 Mr. James is an active member of the Kappa Alpha Psi fraternity where he keeps community service as a focal point in his life.  “Being an only child, and not having children of my own, it’s important to me as my legacy to give back to my community…to give back to children particularly.”  Mr. James is the founder of Project Next Tee, a charitable organization that focuses on developing young talent from surrounding communities in the game of golf.  In addition to his exemplary resume of community service, Mr. James has served as The Strokers Treasurer for more than a decade.  “When I joined The Strokers I was looking for positive professional folks like myself that shared similar experiences, that I could enjoy playing golf with.”  Mr. James wants Strokers to always remember, “It makes a powerful statement to have an organization with so much camaraderie and fellowship existing over this length of time… it’s something special.” 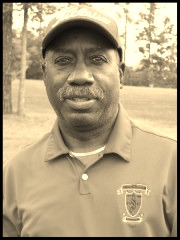 Mr. Clark is a proud alum of Prairie View A & M University, where he touts “The SWAC baby!” every chance he gets.  Mr. Clark describes the early years of The Strokers as, “the Wild Wild West of golf…rolling the ball out of bunkers, rolling it in the fairways…but it was fun!”  He was attracted to the fellowship that he saw, the fun that everyone seemed to have enjoyed.  Initially Mr. Clark focused on finding a club comprised of African Americans which possessed character, that he could share the enjoyment of the game that he loved with, “…that’s what it is all about.”  With retirement on the horizon, Mr. Clark looks to play golf 4 days a week with one day for charity work. He states he told his lovely wife of 29 years, "she already knows this...it's on the books!"   Mr. Clark wants fellow Strokers to always be reminded that, “our group is a competitive forward thinking organization, that shares camaraderie, and should always be looking to take its golf to another level.” 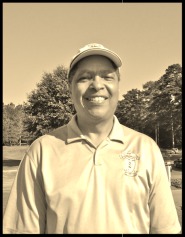 Mr. Pridgeon is an active member of the Atlanta chapter of the Omega Psi Phi fraternity where he strives to remain a relevant leader in the community.  Mr. Pridgeon embodies the spirit of The Strokers mantra, “Dedicated to the Fun of the Game.”  As a career civic leader his highlights include acting as an Executive of the 1996 Olympic Summer Games, and serving in the administrations of Maynard Jackson, Bill Campbell, and Shirley Franklin.  In his retirement he remains engaged with 3 children and 3 grandchildren.  Mr. Pridgeon wants the Strokers to recognize our place in African American golf history.  “We are an inspiration and positive influence on the lives of young people through our camaraderie and leadership.”  Mr. Pridgeon will always be remembered as “The Sheriff”, with an eagerness to always be fair, and equally eager to assess the $5 fine for uniform violations. 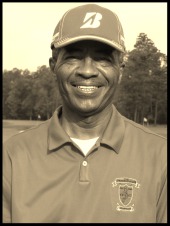 Mr. Davis retired from military duty as a chief warrant officer.  From his duty, he transitioned into civilian life working in the telecom/IT profession.  Mr. Davis currently resides in the suburbs of Chattanooga, TN with his lovely wife Bernice where they are enjoying the retired life.  “I am grateful that I can still play with the young bucks.” Mr. Davis found that he has enjoyed meeting a lot of different people from all walks of life on the golf course.  The social aspect, more specifically building relationships within The Strokers has been very gratifying.  “You can play a round of golf with someone and decide immediately whether you want to be bothered with them or not.”  Frank, as he is affectionately known, is usually a no-nonsense guy that has gradually lost his ‘curse like a sailor’ designation.  “It’s a game, respect it, people get carried away with everything but they have to remember to have fun.” 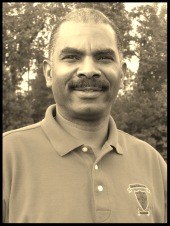 Mr. Hill is an active member of the Omega Psi Phi Fraternity where he concentrates his fraternal interactions within the community he serves through his childcare venture. Mr. Hill skillfully balances his family life and being an owner/operator of a successful business, while still having the time to enjoy the game he loves.  “Retirement is over-rated, I want to stay connected to something other than golf, staying active as a business owner is important to me.”  Mr. Hill’s enduring membership to The Strokers can be attributed to his affinity for the structure of the organization.  “The enjoyment comes from the competitive social interactions, you are forced to focus on the game and your playing partners.”  Bonding with individuals and giving back to the community will always be a focal point for Mr. Hill.  “Strokers should carry on extending relationships beyond The Strokers, business networking, lending support and tapping into the resources within the organization.” It’s easy to know when Mr. Hill has a good day on the links by his well-known catch-phrase, “I love The Strokers!” 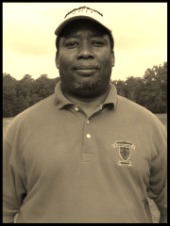 Mr. Rosier embodies the true spirit of Strokers golf, comradery and fellowship infused with competitive fun.  Always focused and game-face ready, Mr. Rosier extolls the virtues of being competitive, “I love competition, I grew up in a competitive family, golf is a sport that allows me to stay competitive.” “Even though we compete, we have to enjoy one another while respecting the game and each other.”  Mr. Rosier's commitmment to The Strokers is fueled by the varying relationships he cultivates and enjoys.  Mr. Rosier recalls watching golf as a child and his father being from Augusta, “I’ll never forget the 1983 Sony Open, I watched it live. When I saw Aoki eagle 18 I was hooked!”  Mr. Rosier holds one of the most highly contested Strokers Championships, and when asked what his keys to success were he stated, “Not knowing any better about the situation, just concentrating on playing good golf.” 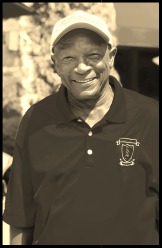 Mr. Witherspoon makes winning multiple club championships appear effortless.  He does so with a laser-focused unrelenting pursuit to preparation.  "My father told me, before you compete, make sure you're ready to compete, don't let anyone beat you for being unprepared."  Mr. Witherspoon works really hard to be competitive well past a decade into his retirement.  He attributes his success to a deft short game and meticulous putting.  'Spoon' as he is affectionately known, wants Strokers to always continue to grow, learn, and be respectful of one another.  "It's important to present yourself in a respectful manner and to carry yourself accordingly", Mr Witherspoon asserts.  When asked to enlighten us to the keys of winning, Spoon jovially replied, "I'm just a lucky player!"

For full outing results, go to the 2022 Tournament Results page in the Members Only section.

Want to Become a Member?

Are you interested in becoming a member but still have some questions? For more information, use our contact form. We look forward to hearing from you